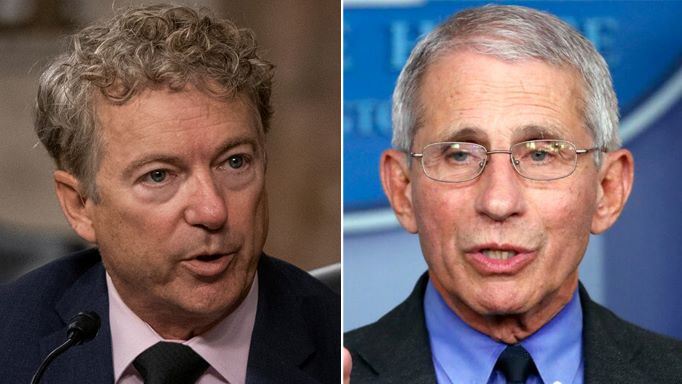 A few weeks ago I went over the timeline of Covid and what was taking place at the Wuhan lab, which is the lab that we now know that Covid likely escaped from. A year ago when you said that you were deemed a “conspiracy theorist” and “spreading misinformation”. I went over how the United States Government funded gain of function research, a type of research that Dr. Fauci claimed under oath wasn’t being funded by the United States government at this lab in Wuhan. Well, what Dr. Fauci said under oath wasn’t exactly accurate. Some would call it lying.

Dr. Fauci sat before the Senate a few times over the last few months and denied that this research was taking place, despite calling it gain of function in his own emails. He repeatedly claimed that it wasn’t taking place. When Senator Paul kept questioning Dr. Fauci, Fauci got defensive and told Paul that he didn’t know what he was talking about. Senator Paul even gave him a way out and asked if there was anything he wanted to amend in his testimony but there wasn’t.

Thanks to The Intercept and a FOIA (Freedom of information act), we now have definitive proof that Dr. Fauci did lie under oath.

This wasn’t even some organization that was out to prove that Dr. Fauci lied to discredit him. They filed the Freedom of Information Act to try to prove that he was telling the truth but it ended up being the opposite.

The Intercept isn’t really a group that is known anymore to be transparent. Glenn Greenwald started the company to bring back investigative journalism and present stories that the media is suppressing. A few years later, Greenwald left his own company because the company that he started was moving away from it’s founding principles. I’m glad to see that they still occasionally follow the founding principles of their company and didn’t try to hide what was found in this FOIA, regardless of what it ended up showing.

In this FOIA, over 900 pages regarding gain of function research was released.

I recently told you that the U.S. Government was funding EcoHealth Alliance and that they were using that to fund gain of function research (https://levimikula.com/the-timeline-of-the-covid-coverup/), which has been confirmed by the FOIA. The United States government granted EcoHealth Alliance $3.1 million, where part of that money went to identify and alter coronaviruses found in bats, which is gain of function research. I also explained in a recent article that this isn’t necessarily a bad thing if done under the proper safety protocols, which it wasn’t at this lab in Wuhan.

The grant proposal acknowledged the dangers of gain of function research and states that “Fieldwork involves the highest risk of exposure to SARS or other CoVs, while working in caves with high bat density overhead and the potential for fecal dust to be inhaled.”

So we now know for a fact that gain of function research was taking place at this lab, that it is very likely that Covid escaped from this lab, and that Dr. Fauci lied under oath. Will there be any consequences for Dr. Fauci lying under oath about a virus that has killed millions around the world? What did Fauci know that could have saved millions of lives?

The consequence for this should be him getting fired and he should be facing jail time for lying under oath and for the information that he witheld about a virus that has taken millions of lives.

How can we trust anything coming from our government, the media, or the scientists after everything that has happened over the last 18 months? Dr. Fauci lied under oath and claimed that gain of function research wasn’t taking place, it was. The entire U.S. government including the CDC and NIH is covering for him. And between the CDC, NIH and the media they are discrediting and suppressing those that claim that drugs that have been proven to save lives such as Hydroxychloroquine and Ivermectin don’t work for Covid. If you even mention the data that proves that they can work in some cases you are accused of being a “conspiracy theorist”, spreading “misinformation” and a lunatic. They immediately dismissed that Hydroxychloroquine could be used to help treat Covid just because President Trump pushed it, then it turns out it does work, not for everyone but in some cases. When someone mentions things like Vitamin C and Zinc could help to lesson your chances of a severe case of Covid, you are mocked. (By the way, I have a friend who recently caught Covid and the hospital told him that he should be taking Vitamin C and Zinc to help treat it.) And let’s not forget to mention that they mock those who bring up the effectiveness of Ivermectin and those that take that horse de-wormer, but ignore that many doctors do prescribe it and refugees from many parts of the world are required to take it before coming into America.

For more on Covid, check out: