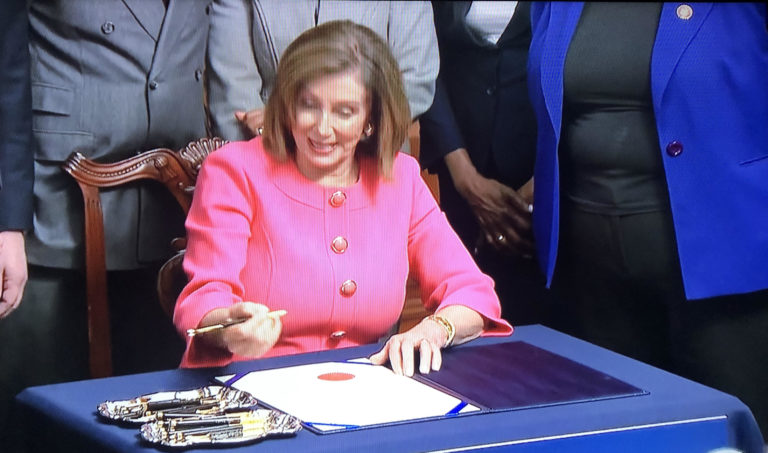 On Thursday, after a 4 week wait, House Democrats FINALLY delivered the articles of impeachment over to the Senate. I’m so glad that they are handling this very “urgent” and “somber” matter in a reasonable time frame. I mean, Donald Trump is clearly a dictator and out of control, and needs to be removed immediately, but not so urgent apparently that it couldn’t wait for another month.

It must be that they have spent the last month in mourning because of this very “somber” occasion. The fact that they have to go through this impeachment is just “So sad, so tragic for our country that the actions taken by the president undermined our national security, to violate his oath of office, and to jeopardize the security of our elections, the integrity of our elections, has taken us to this place so, today we will make history when the managers walk down the hallway, we will cross a threshold in history, delivering articles of impeachment against the President of the United States for abuse of power and obstruction of the House.”

It must be that they were so emotional that they had to go through this that they couldn’t get out of bed for a month. They were just so upset that they needed a month to mourn over this “somber” occasion.

After a month, the mourning finally came to an end and they were able to get out of bed once again. Last week, while signing the articles of impeachment, Nancy Pelosi is seen smiling, and then handing out $25,000 souvenir pens to House Democrats afterwards.

After the signing, House Democrats are seen walking two by two through the capitol and over to the Senate chambers to deliver the long awaited articles of impeachment. The only thing missing through the whole show is the coffin that they should have been carrying, because that’s exactly what it looked like. It would have been more fitting too because it would have symbolized the end of their careers in the circus.

Despite clowns such as Nancy Pelosi and Adam Schiff crying over what witnesses that the Senate needs to call, they don’t have any power in the Senate. The Senate gets to make up their own rules for this trial. Senate Majority leader Mitch McConnell believes that he has the 51 votes to set the rules, so if that is the case, Democrats will have very little say in what happens in the Senate, at least regarding the process.

There are two ways that this can go in the Senate.

1) They can immediately dismiss the charges. This could be shut down very quickly. No witnesses are called. No investigation. Trump is completely vindicated without a trial. The Constitution doesn’t say a whole lot about impeachment, so the Senate does have the authority to proceed that way if they so choose.

2) They can have a full length trial, call the witnesses that they want to call, and then determine if Trump is guilty of any crimes. If they can prove that he is guilty of either of the crimes that the House has charged him with (1. Abuse of Power. 2. Obstruction of Congress) they will vote to remove him. Removal however, doesn’t automatically mean that he can’t run for President again. He can run, unless the Senate specifically votes to prevent him from running again.

In my opinion, option 1 would be a horrible move. Sure, I believe that most Americans just want this to be over already. We have been hearing about the Democrat’s intentions on impeaching the President since before he was even inaugurated. Three very long years, where the left is outraged at one thing, until the next thing comes along that they can demand that he be impeached over. Remember Russian collusion? They didn’t even charge him with that.

Most Americans might want this to just end, but we should get to the bottom of this and what happened. I don’t see any evidence that Donald Trump has broken the law, but I do see tons of evidence that the DNC and Joe Biden have broken the law. I have talked extensively over the past few months about Ukraine, Alexandra Chalupa, the DNC and Joe Biden. All of those articles you can still find at levimikula.com

Mitch McConnell needs to call absolutely everyone in to testify. Everyone who knew anything about Ukraine, should and must be called in for us to get to the bottom of this. House Democrats are demanding that John Bolton be called in to testify and I have no objection to that. If they were so worried about it, they should have went through the proper process, got a subpoena, and forced him to testify, but let’s call him in to testify in the Senate. He should be called. So should Joe Biden, Hunter Biden, Alexandra Chalupa, and anyone else that knew anything.

We keep hearing that Hunter Biden and Alexandra Chalupa have nothing to do with the crimes that Donald Trump has committed. We are told that Donald Trump abused his authority by trying to bribe the President of Ukraine to dig up dirt on Joe Biden. We are told that the phone call with the President of Ukraine was only about Trump winning the next election.

That may be the case. He may have had the intention of digging up dirt on Joe Biden for the purpose of winning the next election. The phone call doesn’t prove that, but that may have been at the back of his mind. But how can we assume his motive for wanting Joe Biden to be investigated? Does Joe Biden’s long history of corruption not deserve any investigation? Does Biden’s long history of corruption not have any impact on the country? How can we say that “No one is above the law, including the President” but then dismiss any corruption around the former Vice President?

If we are truly trying to be fair, we can’t just focus on a phone call, and ignore any context behind it. Context is key, and it’s important we know the context that lead to the phone call. Only then can we begin to understand what his motivation was.  Like I have said repeatedly, I did not vote for Trump in 2016 and if he has committed a crime, he should be removed. All Americans should be saying that about every President, whether you voted for him or not. But let’s have an actual investigation and determine if the President is actually guilty of the crimes that one side of the political isle is accusing him of.

All Posts »
PrevPreviousIs Trump Hellbent on Getting Us Into War With Iran or is He Trying to Keep Us Out of One?
NextPresident Obama’s Inspector General Debunks Democrat Talking Points in ReportNext