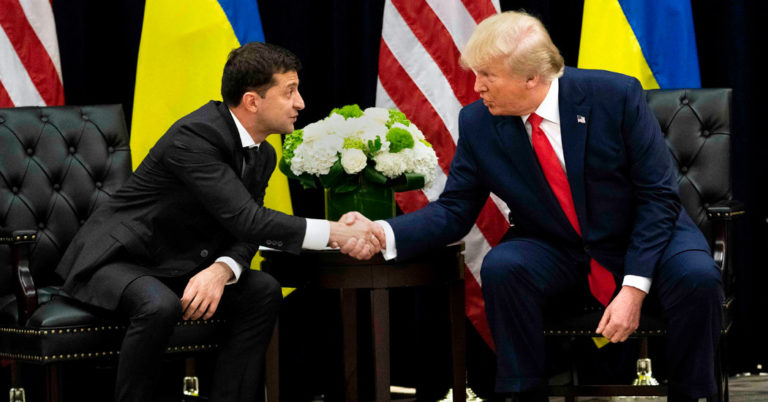 Democrats are once again calling for President Trump to be impeached. Well, I guess I can’t really say “again” since they have been calling for impeachment every day since he was sworn in as President, but this is over something new. The whole Russian collusion delusion fell apart so it was only a matter of time until they tried to spin something else.

Nancy Pelosi knows that this is a very dumb move to try to impeach a sitting President, without any evidence that a crime has been committed. The radical leftists in the Democrat Party are holding her hostage in a parade that she once use to lead and she is trying desperately to make it seem like she is still the leader of that parade. The old Democrat Party is dead. Establishment Democrats such as Nancy no longer are in control and radicals such as “The Squad” (Alexandria Ocasio-Cortez, IIhan Omar, Rashiba Tlaib, Ayanna Pressley) are the ones who are truly running the party and holding traditional Democrats hostage.

Nancy is desperately trying to remain relevant and look like she’s in control of the parade so she decided to open up an impeachment inquiry on President Trump, because that is what “the squad” is forcing her to do. In her desperate attempt to remain relevant, last week she accused President Trump of “betrayal of his oath of office, betrayal of national security, and betrayal of the integrity of our elections.” Keep in mind, that they had absolutely no evidence that a crime was committed, but since the Mueller report didn’t go well for them, they had to try something.

Just like the Mueller report, there is absolutely no evidence that a crime has been committed, and yet they have an impeachment inquiry over something that amounts to an office conversation around a water cooler. That is all this is. They heard a rumor from someone and that apparently warrants an impeachment. All of this began with a whistle blower claiming that “Trump withheld aid to Ukraine as leverage to get dirt on Biden.” The only thing that they had when Nancy Pelosi opened the impeachment inquiry is that there was a whistle blower and there was a transcript. At the time they hadn’t talked to the whistle blower and they hadn’t read the transcript, but somehow they knew he was guilty.

Now if the accusations are true, it could potentially warrant impeachment. If the accusation that Trump was using aid as leverage to try to force Ukraine to dig up dirt on a candidate for President, and we could prove that that was the intention, I would argue that it’s definitely unethical, whether it’s an actual crime or not. The claim that Trump was withholding aid to Ukraine as leverage and that part of it is the crime is complete nonsense. That’s a strategy that almost every President uses regularly. That’s really the whole point in us giving aid to so many countries. The part that would be concerning ethically, would be if Donald Trump was trying to dig up dirt on one of his opponents, Joe Biden.

The problem with this scandal is that there is absolutely no evidence that Trump did commit a crime or even did anything unethical. There is absolutely no evidence that Joe Biden was the reason that he withheld aid to Ukraine. The whistle blowers claims fell apart instantly. The claim that Trump was pressuring the Ukrainian President to work with his attorney, Rudy Guiliani, to dig up dirt on Joe Biden, and thats why he was withholding funds from Ukraine, turned out not to be true. Donald Trump apparently mentioned Guiliani’s name 8 times in their phone conversation. It was later discovered that Donald Trump was not the first to bring up Guiliani’s name, but it was brought up by the President of Ukraine, and Donald Trump only mentioned Guiliani once in the entire conversation. It’s even worse then that. Not only is there no evidence that a crime was not committed but the left is trying to impeach him over helping them?

We know for sure that Trump did temporarily halt $400 million in aid to Ukraine. That aid was halted after a report was released about an American cybersecurity company called “crowdstrike”. Crowdstrike was the company that helped identify that Russian intelligence was responsible for hacking the DNC during the 2016 Presidential election. Crowdstrike was also responsible for the destruction of multiple Ukranian artillery units.

As discovered in the transcript of that conversation, that nobody on the left has bothered to read, Trump was concerned that the people that were involved in the hacking of the DNC were somewhere in the Ukraine and perhaps surrounding the President of Ukraine. According to the transcript, “I would like you to find out what happened with this whole situation with Ukraine, they say crowdstrike…I guess you have one of your wealthy people…The server, they say Ukraine has it. There are a lot of things that went on, the whole situation. I think you are surrounding yourself with some of the same people.” The server that Trump referred to is the server that was tied to the DNC hack. So they are trying to impeach a President who is actually defending the DNC?

Despite the media and the lefts obsession with trying to spin every little thing into some major scandal that Trump needs to be impeached for, there is nothing there. There is no quid pro quo. The only thing that Donald Trump is guilty of is trying to find the server that was behind the Russian hack on the DNC. The President is asking to recover the DNC server for them and the DNC wants to impeach him over that?

Sadly this isn’t about principles or whether or not Trump did anything illegal at any point in his presidency. If it was, the left would wait to figure out what the facts are before immediately jumping to conclusions at every little rumor.  Calling this a “witch hunt” wouldn’t even be a good term to use because during a witch hunt you normally find a witch.. This is nothing more then a political stunt that the left is using to try to take down a President because they still can’t get over the fact that they lost in the last election. These are the signs of a party that is desperate because they know that they are in serious trouble for the next election. These are the actions of a party that has already decided that the President is guilty of something, they just don’t know what he is guilty of yet.