Who is Ilhan Omar? 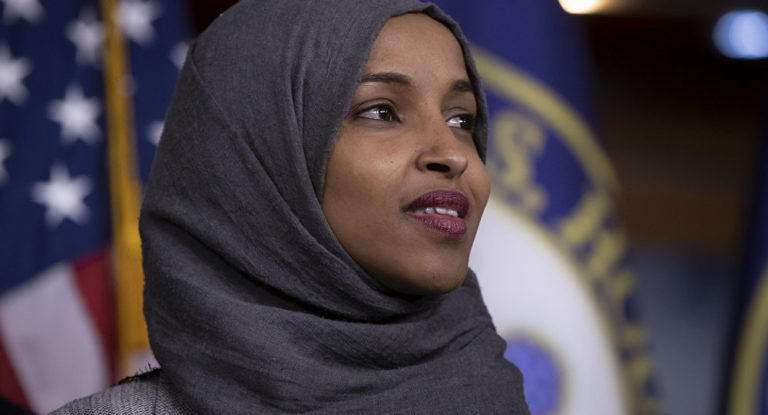 Who is Congresswoman IIhan Omar? You might know her from a few anti-Semitic tweets, or the video of her cracking up about American’s being scared of groups such as Al Qaeda and Hezbollah. But there’s far more to her then just a few stupid comments and a weird sense of humor. She could very well be one of the most dangerous people currently in congress.

Omar is a radical leftist who supports the usual, medicare for all, free college tuition,  eliminating ICE (the Immigration and Customs Agency), protecting sanctuary cities, $15 minimum wage, and the list goes on and on. But it’s not her policies that I am most concerned with, as bad as they may be.

Omar allegedly committed immigration fraud by marrying her brother so that he could become a U.S. citizen. Omar has denied this allegation. The Associated Press asked Omar for records that would prove her denial, in which she declined to answer any questions or provide any documents backing up her denial. The AP later reported that “Omar’s campaign has said she and others can’t get birth certificates because the infrastructure in Somalia collapsed during the civil war that displaced over a million Somalians.” The AP also reported that due to the Freedom of information act, “records about individuals cannot be released without written permission from that individual.” Omar has since gone silent on the issue and refuses to answer any questions.

In 2017, Omar then filed for divorce from her husband/brother. She has claimed under oath that she hasn’t seen or made contact with husband/brother since 2011 and claims that she doesn’t know where he is, but his last known location was in London. There’s just one problem here (besides marrying her brother). Pictures have been discovered of the two of them together in 2014 (three years after she claims she had lost contact with him). Omar has refused to address the situation and has deleted the pictures.

In case you are wondering, she was never charged with committing immigration fraud or perjury and is still allowed to serve in congress.

State Rep. Steve Drazkowski (R-Mazeppa) called her out on her repeated violations. “Representative Omar is a serial violator of our laws. She not only has failed to offer any explanation for her ignorance of our laws but had the audacity to tell her constituents she has not been cited for any campaign finance violation. Well, the Campaign Finance Board now has two open investigations against her and its long past time for Omar to give the public some real answers as to why she’s tap-dancing around our laws and using campaign dollars for personal gain.”

Her response really wasn’t anything unusual for a radical leftist. “We recognize how these folks are deeply invested in stopping progressive, black, Muslim, hijab-wearing, immigrant woman…we know these people are part of systems that have historically been disturbingly motivated to silence, discredit, and dehumanize influencers who threaten the establishment.”

So you see it’s not her fault that she married her brother to commit immigration fraud, refuse to provide the proper documents to prove that she didn’t commit immigration fraud, lied under oath about when she lost contact with her husband/brother, illegally used campaign funds to pay for personal travel expenses, illegally used campaign funds to pay for her divorce, and violating House rules by accepting payment from MnSCU. It’s because we are a racist, Islamaphobic, Xenophobic, bigoted country.

Just when you think things can’t get any more disturbing, they do. On March 23rd 2019, Omar spoke at CAIR’s (Council of American Islamic Relations) 4th Annual Valley Banquet. In fact she has been fundraising for CAIR for years and is a former board member of CAIR’s Minnesota chapter. Who is CAIR? CAIR was founded as a propaganda arm for Hamas, who has been officially designated a terrorist organization. Hamas was created by the Muslim Brotherhood, with the goal of destroying Israel.

You would think that this would concern those in the mainstream media enough to look into but don’t hold your breath waiting for anyone to report it or tell you the truth about who Omar or Hamas really is. No one cares enough to look into her background and the media and the radical left constantly jumps to her defense every time she makes an anti-Semitic remark.

Omar commented that “What I’m fearful of — because Rashida and I are Muslim — that a lot of our Jewish colleagues, a lot of our constituents, a lot of our allies, go to thinking that everything we say about Israel to be anti-Semitic because we are Muslim”. Or maybe it’s comments such as “Israel has hypnotized the world, may Allah awaken the people and help them see the evil doings of Israel” which she tweeted on November 16th 2012. Or maybe it’s your constant attacks on AIPAC.  Or maybe it’s when you accused Israeli supporters of being bought my Jewish money and tweeted “It’s all about the Benjamins baby”. Or maybe it’s your support of BDS whose goal is to delegitimize Israel. Or maybe it’s you fundraising for the propaganda arm of Hamas, which again was created with the sole intention of destroying Israel. Or maybe American’s are disturbed after seeing the video of you cracking up at people who say Al Qaeda and Hezbollah with intensity.

Don’t buy the left’s narrative that these comments are taken out of context or her apology of a tweet only when it becomes controversial. Omar has a long history of anti-Semitic comments and ties to organizations who’s only goal is the destruction of Israel. It’s time that the media does their job and exposes what she really believes in. It’s time we as individuals start to hold the media and our elected officials accountable for their words and actions.