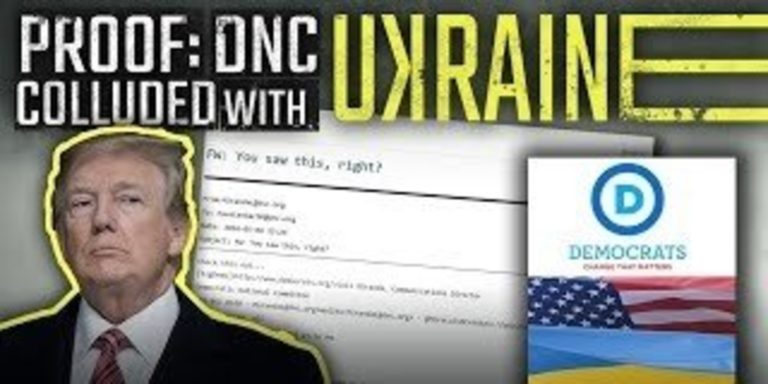 For the past three years, we have heard nonstop that Donald Trump colluded with Russia and needs to be impeached. After nearly three years, Speaker of the House Nancy Pelosi, who was against impeachment the whole time we were waiting for the Mueller Report, has suddenly, instantly, changed her position and has now opened an impeachment inquiry. Why? Why the sudden change? After millions of dollars and a two year investigation, she was still against impeachment over Russia, but when it comes to Ukraine, without any of the facts coming out, before the transcript of the phone call was even released, and before she even talked to the whistle blower, she suddenly changed her mind on impeachment?

This sudden change over what amounts to an office rumor, actually makes a lot of sense now. The Democrats desperately need to control the narrative. Everything they accused Trump of with Russia, they were doing with Ukraine, and it could bring down the entire Democrat Party. What Joe and Hunter Biden did really only scratches the surface of a much larger and more corrupt party.

It’s possible something else will come out that implicates Trump, but all of the facts right now are pointing to the Democrats and a very long pattern of corruption when it comes to Ukraine.

That should be enough to show you that something doesn’t seem right. But that’s just the Biden story. That just scratches the surface of corruption between the Democrats and Ukraine and no one in the media wants to talk about it. All everyone wants to talk about is what is really like the front and back cover of a novel. The media seems obsessed with the back cover (Trump’s phone call with the President of Ukraine) and care a little about the front cover (Joe and Hunter Biden) but that’s about it. What I’m going to explain now is some of what’s between those two covers.

Now because of this poor, very corrupt country, Ukraine, President Obama decided to give a massive aid package in May 2014. That aid package included:

After that aid package was given, because they are so corrupt, the United States demanded that Ukraine start a National Anti-Corruption Bureau of Ukraine. A man named Artem Sytnky is tapped to be the first director of this bureau. Since he is now the director, he has a direct line to President Obama. Back to them in a minute.

Now I’m sure that it’s just a coincidence that that $1.8 billion in PrivatBank goes missing. I mean it’s not like a corrupt oligarch would ever consider stealing $1.8 billion or anything. It also must be a coincidence, that this guy who is so corrupt that he couldn’t even come into the United States, is just happened to be given a Visa at the same time that we deposited $1.8 billion into his bank.

By late 2015, we had become Ukraine’s piggy bank. Not only are we giving them money but we are also helping them with advisors. Advisors such as:

In June 2015, Donald Trump announces that he is running for President.

In late 2015, the DNC hires Alexandria Chalupa, who is a daughter of an Ukranian immigrant, to do opposition research on Donald Trump. Opensecrets.org has confirmed that she did in fact work for, and was paid $71,918 by the DNC. That was just for her work with the 2016 election, although she’s been working with the DNC since 2004.

In January 2016, Chalupa starts to investigate Donald Trump. She approaches an official in the DNC because she “feels like there was a Russia connection.” Oh really? She felt like Trump was connected with Russia, before any evidence or allegations? Paul Manafort wasn’t working for the campaign at this time. There was no Steele Dossier at this time. George Papadopoulos wasn’t on the campaign yet. There was no fISA requests. But somehow she just “felt” that Trump was connected to Russia?

That same month, that Chalupa just had “a feeling” that there was a connection with Trump and Russia, the Obama White House summoned the National Anti-Corruption Bureau of Ukraine. The Obama administration said that we need to begin cooperation with Ukraine. The meeting immediately turned to two main issues: 1) The scandal involving Joe and Hunter Biden. 2) A case tied to Paul Manafort. Obviously, they decided to investigate the case tied to Paul Manafort and was pressured to ignore the scandal involving the Biden’s and to not investigate where that $1.8 billion went. You would think we should be more concerned about $1.8 billion in taxpayers money just disappearing.

After the meeting, a prosecutor with the anti-corruption board, who was investigating the Biden’s involvement, was fired. This investigator who never had any problems with the Obama administration before was now fired because, according to him, “I was leading a wide ranging corruption probe into Burisma Holdings (“Burisma”) a natural gas firm active in Ukraine, and Joe Biden’s son, Hunter Biden, was a member of the Board of Directors. I assume Burisma, which was connected with gas extraction, had the support of Vice-President Joe Biden because his son was on the board of Directors.”

Following this meeting, The Hill ran a story titled: “How the Obama White House engaged Ukraine to give Russia Collusion narrative in an early boost.” According to the article, the deputy head of the anti-corruption organization claimed that “there was a clear message about helping the Americans with the party of the regions case.” Regarding the Manafort case, “there was a lot of talking about needing help and then the ledger just appeared in public.” What is this ledger that was mentioned? Back to that in a minute.

In March 2016, out of nowhere, Paul Manafort joins the Trump team. This is definitely exciting news for the Democrats considering they had been setting Manafort up for months. Shortly after that, Chalupa starts working directly with the Ukranian embassy in the United States and starts raising alarm bells on Manafort. According to Chalupa’s own words, the embassy “worked directly with reporters researching Trump, Manafort, and Russia to point them in the right directions.”

So the Ukranian embassy in the United States worked directly with a DNC operative, to damage the Republican candidate for President, to influence the election. Doesn’t that sound exactly like what they accused Trump of doing with Russia?

Remember that Anti-corruption bureau in Ukraine? In June 2016, the FBI decided that they were doing such a good job that the two groups should partner together. Now they could share any information that they couldn’t have shared before. It’s a lot like the wall that was between the CIA and FBI before 9-11. The two groups couldn’t share information with each other, but when that wall was torn down, they were free to share anything they wanted.

So what was the ledger that was discussed in the meeting at the White House? This ledger was released by Ukraine’s anti-corruption bureau on Paul Manafort. The black ledger refers to financial records that were kept by the former Ukranian President. Within days of this coming out and Paul Manafort going to jail, Tony Podesta, who was doing the same thing as Manafort, with the exact same people, just decides to suddenly close his political lobbying firm. This is one of the biggest lobbying firms in the United States, and he just suddenly decides to close up shop and retire without any warning. You would think that that would be something that should be investigated, considering it was right after Paul Manafort was arrested.

In June 2017, White House Press Secretary, Sarah Huckabee Sanders, accused the DNC of colluding with Ukraine and even quoted a New York Times article. If we had anyone in the media who did their jobs, that claim would have been investigated immediately. That is a very serious allegation that was completely ignored by the media. Had I been in the White House press pool, that would be my very first question. I would be demanding an explanation.

I do have to give the New York Times some credit. Despite being a leftist paper, they do occasionally get some things right and when they really want to, they know how to act like journalists.

The media in the United States seems to have forgotten to talk about the two men in Ukraine being arrested because they tried to influence the US election. Seems like kind of a big story that I would have liked to read about. They were found guilty and very interesting evidence was released. The Ukranian prosecutor gave an interview with the Ukranian media where he claims that “I don’t know how, but the Americans got an audio recording of Mr. Sytnik’s (the head of the corruption bureau in Ukraine) conversation: He is resting with his family and friends and discussing how he would like to help Hillary.”

This audio that was released has been reported by Ukranian papers for months, yet somehow the media in the U.S. didn’t find it to be a big deal? The audio proved that Ukrainians are in fact guilty of trying to interfere with the 2016 election.

In April 2019, the Mueller Report is released and proves absolutely nothing of what the Democrats have been accusing Trump off for over two years.

This new President thinks that everything that is currently happening in Ukraine is insane and that the whole country is corrupt, including his own ambassador. He decides to recall the Ukranian ambassador, not long after Donald Trump also fired his ambassador. That means the pipeline is now clear after corrupt ambassadors for both the Ukraine and the United States are out of the way. That’s what led to the phone call between the two Presidents.

Everything I have written here can easily be proven because of documents and audio recordings that have been released. But let’s forget all of that. No, the phone call between the two Presidents is what the media thinks is the only important part of this story. They’ll throw the Biden’s under the bus too since they don’t really care about Biden. The solid evidence that Ukranian officials tried to influence the 2016 election apparently isn’t news worthy enough.

Sadly, this still only scratches the surface. This is just some of what has been proven so far. You would think that it would be important for someone to actually look into, but the media is too busy focusing on a phone call to actually report any of the facts.

For the past three years, we have been hearing nonstop that Donald Trump colluded with Russia, and yet have heard absolutely nothing about what the Democrats were doing in Ukraine. The Ukranian embassy in the United States worked directly with the DNC to get dirt on a candidate for President and influence the 2016 election, and no one is talking about it.

There is absolutely no reason to push impeachment a year before an election…unless you need to change the narrative, and that is exactly what they are trying to do, and what they desperately need to do. The DNC is slowly being exposed and they are terrified that their dirty secrets could take down the entire party. It’s up to us to hold them accountable for their corruption.