The Real Reason Behind the Lockdowns Last Spring 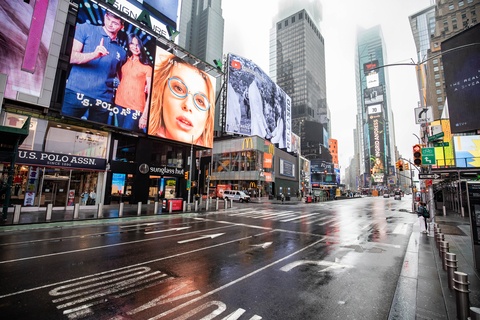 The longer these lockdowns go, the more suspicious I am becoming of the motivation behind the lockdowns. Is this really about a virus with a 99.7% survival rate or is there more behind them? And are they just about Governors like Gavin Newsom, Andrew Cuomo, Gretchen Whitmer and Tom Wolf who just want to act like authoritarians or is there a much bigger plan at play?

The likelihood that all of these Governors are actually in on the plan is pretty low. They are most likely just useful idiots that are being played by those who are actually in control and those who are in a position to push a narrative that we can’t reopen too fast and that we must continue to follow the “science”, which really is any narrative that Fauci can come up with that day.

When you look at the bigger picture, it’s becoming clearer everyday that there is a plan far greater then just reducing the number of deaths from COVID. Florida and New York have a relatively similar death rate even though Florida is open for business and New York is still living under draconian mandates

Once you begin to look at what organizations such as the United Nations and the World Economic Forum are advocating for, and radical proposals like the Great Reset, it really leads you to question if this is really about the virus or are they just using the virus to bring about a Great Reset.

They needed a crisis. They’ve been trying to scare you with climate change for decades. But that wasn’t working. So they needed something else. They needed something that they could use to gain as much control as possible to bring about this reset, end capitalism, and move the world under a system that looks similar to China.

If this really was just about the virus, they wouldn’t be moving the goal posts every other week. First it was 15 days to slow the spread. Then it was another 15 days. That quickly became we need to remain shut down until we found a vaccine. Now the latest is that you need to wear multiple masks, get a vaccine, but that still doesn’t mean that you are able to go out and eat at a crowded restaurant according to Facui. The new date is that we might need to wear masks through 2022 and that the virus might not be under control until 2027.

One group that is pushing for this Great Reset is a group called “Purpose Disruptors”. According to their website, they are a “network of advertising insiders working together to reshape our industry to tackle climate change.” Their mission is to “create a visible, large scale, bottom up, movement within the advertising and marketing communications industry, that will act in solidarity to meaningfully tackle climate change.”

Purpose Disruptors claims that the lockdowns resulted in a 7% decrease in global emissions. Coincidentally, the United Nations has now come out and said we need a 7.6% decrease every year until 2030 to avoid a climate disaster. According to the Secretary General “We are close to the point of no return.” I feel like I’ve been hearing this for the past 20 years. It must also be a coincidence that the UN Secretary General is an agenda contributor to the World Economic Forum which is the group behind this Great Reset.

Then we have Bill Gates. The Gates Foundation publishes the “Goal Keepers” Report. This report tracks the word’s progress in meeting the 17 sustainable living goals that have been set by the United Nations for the world in 2030. Gates is also a long time contributor to the World Economic Forum.

Gates believes that the government needs to step in to drive down the cost of green energy so that more will buy it. According to Gates, “there are two levers the government can pull: reduce the cost of zero-carbon alternatives or charge for the hidden costs pollution. Ideally, any plan to address climate change does both.” In other words, he wants to see energy prices “necessarily skyrocket” like they did during Obama’s presidency and you’ll see more and more of the blackouts like we saw in Texas in February because we are going to be moving so fast toward energy sources that are unreliable.

You see this is all connected. Organizations like the World Economic and the United Nations are pushing this narrative that we must act right now to fight climate change and that we must implement this “Great Reset” to save the planet. But it’s not about the environment, it’s about control. It’s about controlling every aspect of your life, from what you drive to what you buy to what companies you invest in. Most of the big corporations are in on the Great Reset. What they needed was a crisis to drive small businesses out of business and they found that with COVID.

I’m not saying that COVID isn’t serious, because it is. But is a virus with a 99.7% recovery rate for the general population really worth destroying the economy over? Why not just isolate those who are most at risk and allow the rest of the country to go back to normal? Why are we not getting a set benchmark, such as what the number of new daily cases would have to fall below or the number of daily deaths would have to fall below before we can get back to normal? Why keep moving the goalpost every few weeks?

They can’t tell you that this virus won’t be under control for another 9 years because you won’t fall for that if they tell you that now. They need to keep slowly moving the goal post until we hit 2030, the Great Reset is fully implemented, but then life as we know it is gone. There is no going back to what life was like before they took over control of absolutely everything. I know that sounds paranoid but if you read the actual documents coming out of the World Economic Forum, that is their goal. Complete control, the end of Capitalism, and a new economic system that looks like China.

For More on the Great Reset check out: