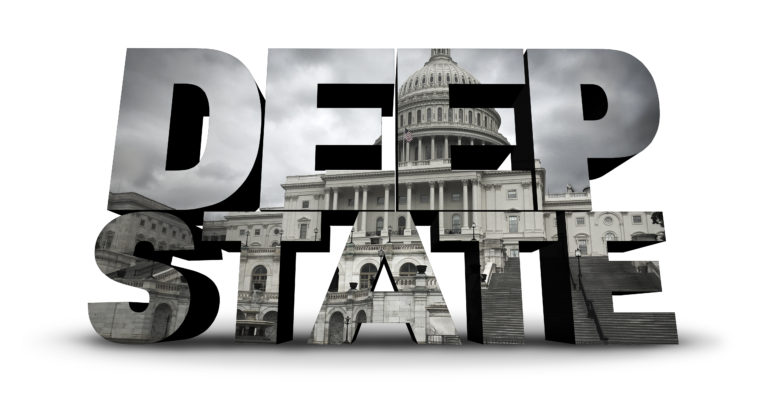 Anyone that knew me in 2016 knows that I wasn’t the biggest fan of Donald Trump. I didn’t like his character. I didn’t trust that he had really become this strong Constitutional Conservative that so many on the right were now claiming that he was.  After nearly three years of him being in the White House, he still hasn’t proven that he is a strong defender of the Constitution, especially when it comes to things like the Second Amendment. He did get one very important thing right though, whether it was his intention or not. Whether he knew it or not, he was coming into the White House like a bull in a China shop, and exposing the Deep State.

After World War 2, both the CIA (a department that Truman created just a year earlier) and the State Department, intentionally tried to undermine Truman after he made the decision to recognize Israel as a sovereign nation. As Michael Doran of the Hundson Institute puts it:

“The ‘deep state’ worked to reverse his decision.  No sooner had Truman recognized Israel than the CIA secretly sponsored and funded the establishment of the American Friends of the Middle East.  Outwardly a ‘people-to-people’ public diplomacy initiative, AFME brought influential Middle Easterners to the United States, helped them write and publish books and articles, and seeded Middle Eastern student organizations on American college campuses.  It also lobbied Congress – against Israel. AFME was a remarkable instance of a CIA-confection front organization designed to counter official government policy, in this case seeking to delegitimize Zionism in domestic American politics.”

It didn’t take long before Truman regretted making the CIA. He soon realized that he created a monster that became out of control very quickly. The CIA was originally created to  serve the president by consolidating intelligence reports from numerous sources. It was never intended to pursue its own policies, which is what they very quickly started doing, and have been doing ever since.

After Truman left office, he warned about this monster that he had helped to create.

Now, as nearly as I can make out, those fellows in the CIA don’t just report on wars and the like, they go out and make up their own, and there’s nobody to keep track of what they’re up to.  They spend billions of dollars on stirring up trouble so they’ll have something to report on. They’ve become… it’s become a government all of its own and all secret. They don’t have to account to anybody.

That’s is a very dangerous thing in a democratic society, and it’s got to be put a stop to.  The people have got a right to know what those birds are up to. And if I was back in the White House, people would know.  You see, the way a free government works, there’s got to be a housecleaning every now and again, and I don’t care what branch of the government is involved.

And when you can’t do any housecleaning because everything that goes on is a damn secret, why, then we’re on our way to something the Founding Fathers didn’t have in mind. Secrecy and a free, democratic government don’t mix. And if what happened at the Bay of Pigs doesn’t prove that, I don’t know what does. You have got to keep an eye on the military at all times, and it doesn’t matter whether it’s the birds in the Pentagon or the birds in the CIA.”

We are long overdue for that housecleaning that President Truman warned was needed. And that’s exactly what Donald Trump has started doing. Trump has been exposing the Deep State for the monster that they really are, whether or not that was actually his intention. And that is why they are trying so hard to destroy him. They must destroy him before he stumbles across something and exposes absolutely everything.

Everyone in D.C. believes that Eric Ciaramella is the whistleblower. If they are accurate, it is critical that he testifies in front of the Senate because he was on the National Security Council (NSC) during the Trump administration as a Ukraine expert. He was later kicked out of the White House for leaking information and pushing Russian collusion hoaxes. He also worked directly with DNC operative Alexandra Chalupa, who worked alongside the Ukrainian embassy in the U.S. to dig up dirt on Donald Trump. He also worked alongside Joe Biden when he was made the “point man” in Ukraine. Is that not enough to at least raise some doubts on whether he is a credible witness or not? Now that I think of it, does it not at least worth some questioning on why everyone who has been called by the Democrats to testify are career diplomats?

What exactly are they so threatened by? Why are they trying so hard to discredit Donald Trump? It’s because he is about to expose everything that the Deep State has been up to over the past few decades. He is about to expose how the State Department is funding groups to cause revolutions across the world. Could that be where the missing $7 billion in Ukraine went? Could that be why they are so worried about Donald Trump poking around in Ukraine?

If Donald Trump keeps poking around where he doesn’t belong, they know that he could accidentally stumble across what they have really been up to and they can’t have any of that. They can’t have him discovering that we have a State Department that actively opposes whoever the President is and regardless of what the person that you elected wants. You no longer have a say on the direction that the country is headed in because they are making all of the decisions and you are the one that is paying the price for it.

Could this be the reason we have spent decades trying and failing at nation building across the world, including but not limited to Iraq, Syria and Libya? Could this be the reason for so many “spontaneous uprisings” across the entire world over the last several decades? Could it be that stability in places like Iraq isn’t even the goal of the State Department? Are they working along side someone to destabilize the world? If they are intentionally trying to destabilize the world, what is the end goal of destabilizing so many countries?

Make sure to check out the Mikula Report over the coming weeks and months for more!

All Posts »
PrevPreviousThe Impeachment Hearings: Starring the Know Nothings
NextNew IG Report Proves FBI Tried to Influence the 2016 Election. (And I Have the Document to Prove It)Next