Should it be Illegal to Burn the American Flag 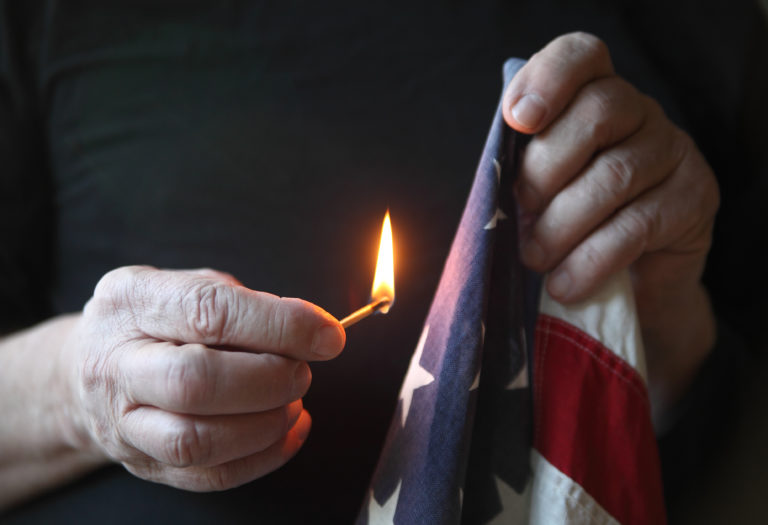 President Donald Trump recently pledged his support for a bill introduced by Rep. Steve Womack (R-Ark.) and Senator Steve Daines (R-Mont.) that would give congress the power to  ‘‘prohibit the physical desecration of the flag of the United States.’’ In 1989 The Supreme Court ruled in Texas v. Johnson that burning the American flag is a form of freedom of speech protected by the first amendment. The ruling made it unconstitutional for local, state, or the federal government to prohibit flag burning, so a Constitutional amendment would have to be passed before flag burning could be banned at any level of government.

While addressing the bill, Rep Womack said that “Our flag is more than a cloth painted red, white, and blue. It is a symbol of worldwide freedom, unity, and liberty. Generations have fought to defend our stars and stripes – and the American people have simply given too much for the flag to not have the ability to protect it.” Senator Daines responded with  “Our United States flag is a timeless symbol of liberty that tells the story of America, the story of our enduring pursuit of freedom. Remembering the sacrifices of all who carried its colors into battle, our nation should always render the flag the honor and dignity it is due.”

I have to partially disagree with Senator Daines. He is right when he says that “Our United States flag is a timeless symbol of liberty” and that it’s the “story of our enduring pursuit of freedom” but how does banning free speech uphold liberty? Shouldn’t I have the right to burn the American flag even if it is disrespectful as long as I’m not hurting anyone nor damaging someone else’s property? Isn’t the whole idea of the first amendment to protect speech, especially for those that I disagree with? If the first amendment doesn’t apply to speech that is offensive, then what makes us any different then any other country?

On June 15th, President Trump tweeted “All in for Senator Steve Daines as he proposes an Amendment for a strong BAN on burning our American Flag. A no brainer!” It’s not surprising that Donald Trump praised this bill and he has been consistent over the past few years.  In November 2016, then President elect Donald Trump tweeted that “Nobody should be allowed to burn the American flag. If they do, there must be consequences – perhaps loss of citizenship or year in jail!” Really? Jail time or a loss of your citizenship for burning a flag? Does that sound like a free country to you? Or does that sound like a violation of your freedom of speech?

Before I’m accused of being anti-American, let me be clear. I am not saying I support burning the American flag. I would never do it and I do think it is disrespectful to the million of brave men and women who fought to make this the greatest country on earth. I personally think you are an idiot if you are out in the streets burning the American flag and you bet I will call you out on it. But didn’t our millions of brave men and women fight and many times die for your right to act like an idiot?

I really don’t understand how the party that claims to be for free speech and is outraged that freedom of speech is being limited on college campus’s and is outraged when Facebook or Twitter decides to silence Conservative voices,  is in favor of limiting my freedom to burn the flag.

Fortunately, this amendment doesn’t look like it’s going to go anywhere and shouldn’t. To amend the Constitution, two-thirds of both the House and Senate would have to vote to formally propose the amendment. Then, three-fourths of state legislatures must vote in favor of the amendment for it to be added to the Constitution. It is very unlikely that a majority of Democrats will support banning the flag so it is almost guaranteed to lose in both the House and Senate.

This should be an issue where both sides should be able to come together on because the answer is never less speech. Freedom of speech, of any kind as long as it’s not physically harming someone or their property, should ever be limited. I may not agree with what many of my friends on the left say, but I will defend their right to say it and I hope they would defend my right as well. If we aren’t willing to defend the right of freedom of speech for those we disagree with, then we don’t truly believe in freedom of speech, and that is a sad day for America.

I’ll leave you with this quote from Michael Douglas in “The American President”. “You want to claim this land as the land of the free? Then the symbol of your country can’t just be a flag; the symbol also has to be one of its citizens exercising his right to burn that flag in protest.” Our values are far deeper then just a flag. It’s what that flag represents. Freedom. It’s time we defend that freedom.

All Posts »
PrevPreviousHow Did the Left Get Venezuela so Wrong?
Next600,000 Crimes Committed by Illegal Immigrants…And That’s Just in TexasNext