Report: Leadership roles of Kevin McCarthy and Mitch McConnell may both be in jeapody 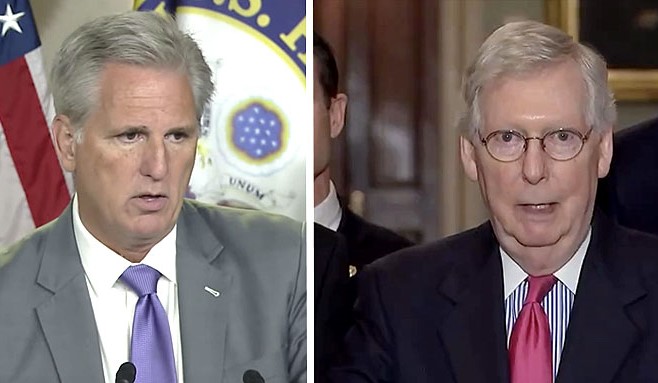 Both Kevin McCarthy and Mitch McConnell reportedly do not have the votes to maintain leadership roles when the new congress takes effect in January.

While not a sure thing yet, Republicans do appear that they will narrowly take the house in January. Kevin McCarthy has been expected to be nominated for Speaker when the GOP took control, but that could now be in jeapardy.

Since the disappointing results of last week’s election, there has been speculation that many Conservative members of congress may not support McCarthy to be nominated for speaker. This week the Freedom Caucus announced that there will be an alternative for Speaker when the GOP meets this week to vote for a nominee.

“McCarthy doesn’t have 218 and there will be an alternative challenger,” a spokesman for Rep. Andy Biggs, R-Ariz., told Fox News Digital.

On Wednesday night, Rep. Bob Good (R-VA) also confirmed to Axios that McCarthy has not “done anything to earn my vote” and said a number of GOP members “will support a challenge.”

Even if McCarthy does end up winning the nomination for Speaker which only requires a simple majority of Republicans, he still may have a very difficult time getting elected. McCarthy will need 218 votes to become the next speaker, and with the GOP likely having a very narrow majority, just a few members could hold McCarthy’s bid for Speaker hostage. McCarthy may be forced to make a deal with the Freedom Caucus on things like other leadership roles for Freedom Caucus members and diminishing the power of the Speaker.

“If there are only a handful of defections, people will say Kevin [McCarthy] likely has this and his hand becomes stronger,” said a senior aide to GOP leadership. “But if the vote against him is in the double digits, then all bets are off the table.”

“If the GOP majority is 218, he can’t afford to lose a single vote,” said the aide. “If it’s 228 he can probably lose up to 10 votes. All eyes are on the conference vote because that will be the first sign of how strong or vulnerable McCarthy is right now.”

Current minority leader Mitch McConnell could also be in trouble after nearly a dozen Senate Republicans have expressed disappointment in McConnell’s leadership after disappointing results after last week’s election.

Last week Missouri Senator Josh Hawley claimed that he would not support McConnell’s bid for another term in GOP leadership.

Several Republicans including Marco Rubio and Ted Cruz called for a delay until after the races in Alaska and Georgia have been decided, but the nomination for Senate minority leader is expected to move forward this week.

Secret ballot elections for leadership roles in both the House and the Senate are scheduled to take place this week.