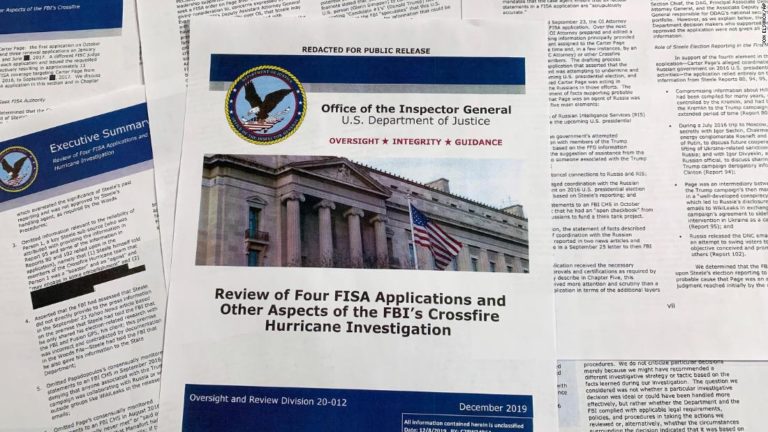 A few weeks ago I gave you the 17 “omissions” in the Carter Page FISA applications which lead to the FBI spying on the Trump campaign. You don’t even have to read the full document to see the clear evidence that the FBI intentionally lied to try to influence the election. But this report proves another thing. Remember the memos that both sides released in 2018? The Republicans released a memo where they found 4 findings of FISA Abuse:

Now of course this is all a conspiracy and the Republicans are all a bunch of liars. So obviously the reasonable thing to do is to release another memo calling the Republicans out for their lies and to correct the record. That’s exactly what Adam Schiff did. According to Adam Schiff’s responding memo:

We know now that the Adam Schiff lied on all of these points. The IG report released last month backs up all of Devin Nunes’ claims in his memo in 2018. Even a fact-checker for the Washington Post was forced to admit that Devin Nunes got a “fair amount” right in his memo and that the truth sides more with the Republicans then with the Democrats.

Steele claimed that nothing was omitted from the FISA court, but the IG Report uses the word “omitted” 39 times. One of those times was “inaccuracy” #6 which directly contradicts Schiff’s first claim. “Omitted Page’s consensually monitored statements to an FBI CHS in August 2016 that Page had “literally never met” or “said one word to” Paul Manafort and that Manafort had not responded to any of Page’s emails; If true, those statements were in tension, with claims in Report 95 that Page was participating in a conspiracy with Russia by acting as an intermediary for Manafort on behalf of the Trump campaign…”

Adam Schiff’s second claim that “The Steele Dossier was only “narrowly” used in the application” was debunked by the Inspector General (IG). According to the report, “We determined that the crossfire Hurricane Team’s receipt of Steele’s election reporting on September 19, 2016 placed a central and essential role in the FBI’s and department’s decision to seek the FISA order.”

Sciff’s and the Democrats third claim that “Steeles’ information was corroborated.” was debunked. According to the IG Report “We further determined that the crossfire Hurricane Team was unable to corroborate any of the specific substantive allegations regarding Carter Page contained in Steele’s election reporting which the FBI relied on in the FISA applications.”

The FBI couldn’t verify any of the information and yet they continued to use it as an excuse to spy on a member of a Presidential campaign. But it gets even worse then that. The CIA even tried to warn the FBI about the lack of vetting, according to this report and yet they still used it as justification to spy on an American citizen. “…The Central Intelligence Agency (CIA) expressed concern about the lack of vetting for the Steele election reporting and asserted it did not merit inclusion in the body of the report. An FBI intel section chief told us the CIA viewed it as a “internet rumor”. In contrast, as we describe in chapter six, the FBI, including Comey and McCabe, sought to include the reporting…”

The Democrats claims that “The FBI and DOJ repeatedly informed the court about Steele’s background, credibility, and potential bias.” was also proven to be inaccurate. The IG found that the FBI hid the fact that Steele was working for the Clinton campaign, and that  “Steele was desperate that Donald Trump not get elected and was passionate about him not being the U.S. President.”

It’s also important to point out that the FBI “…altered an email from the other agency (CIA) so that the email stated that Page was “not a source” for the other agency, which the FBI affiant relied up on signing the final renewal application.” Let me repeat that in case you thought you were seeing something. The FBI “altered an email from the CIA” because they did not want the FISA court to know that Carter Page worked with the CIA to bring down a Russian spy ring back in 2013. The CIA said that Carter Page “was a source” and the FBI changed it to say that Carter Page was “not a source” before submitting that to the FISA court. That was how they got the approval to spy on the Trump campaign.

Before the 2016 election and after Steele was caught leaking information, the FBI was forced to deem Christopher Steele “closed for cause” meaning that he wasn’t credible. Instead of ending their relationship with Steele, they continued an off the books relationship through Bruce Ohr. All communications between Steele and the FBI were suppose to stop, according to the official rules of the FBI. But they didn’t. 13 secret meetings illegally took place after Steele was deemed “closed for cause”.

So that leaves me with several questions. Why are we listening to anything that Adam Schiff claims? Why are we listening to a guy who continues to push something that he knows to be false? Why isn’t anyone in the media demanding an explanation from Adam Schiff on why he thought it was appropriate to lie to the American people? Why is no one in the Democratic Party calling Schiff out for his lying?

I can’t end this article without mentioning that this IG Report did not come from a “alt-righter” nominated by Donald Trump. This report came from the Inspector General who President Barack Obama nominated for that position. It was an Obama nominee who uncovered the truth and debunked all of the Democrat talking points.

All Posts »
PrevPreviousHouse Democrats Deliver Articles of Impeachment to Senate (FINALLY!!!)
NextWhat’s Happening in Virginia is Exactly What Our Founding Fathers Warned AboutNext