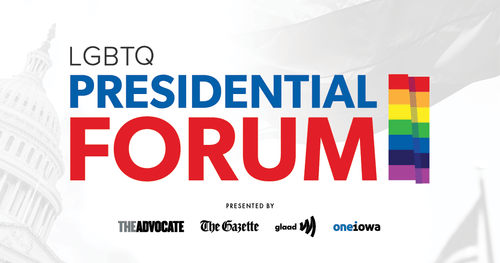 Of course no pander-fest is complete with out mentioning Donald Trump. Almost every single candidate that came up to speak made sure to mention “Donald Trump” or refer to him in the 10 minutes that they each got to speak and answer questions. Cory Booker also made sure to remind everyone that it’s time we had a “woke” president.

I do partially agree with Marianne when it comes to those seeking asylum. LGBTs are discriminated against in many parts of the world and that should mean that they can apply for asylum. That doesn’t mean that LGBTs should automatically move to the front of the line just because they are LGBT. But if someone is being persecuted for their sexuality, then they should absolutely get asylum.

Next up we had Former PA congressman Joe Sestak, who felt the need to do some weird thing with his voice every few seconds and make his voice sound deeper and more serious. I’m not sure how a guy who is polling at 0%, made it into this forum, considering he has 0% chance of actually winning.

Then we have Joe Biden who spent most of his time creepily flirting with the woman who was asking him the questions. Joe was booed for previous comments calling Vice President Mike Pence a “decent person”. I do have to commend Biden for kind of sticking by that comment even though he felt the need to pander to the audience and claim that’s what you call people on the other side when you are trying to get things done. I don’t agree with Pence on everything and think that he is wrong on a few LGBT related issues, but I have no problem calling Pence a decent person or saying that I admire him.

Next up we had Spartacus (aka Cory Booker) who felt the need to flirt and give dating advice to the guy asking the questions during his 10 minutes.  I do have to give Booker credit for calling out the Democratic party for it’s “shameful history” on LGBT issues, particularly marriage equality. I don’t agree with Booker on much but I see very few Democrats willing to do that, even though I didn’t agree with most of what he said.

I am curious to know what “science based sexual education” Cory Booker is referring to. Does that mean that schools should only teach about both genders (not all 350 of them or whatever the current number is)? Cory might not know this but science has declared there are only 2 genders. It’s interesting how science should only be believed as long as it backs up the left’s talking points. Any science that they don’t agree with, they seem to ignore.

Next up we had Tulsi Gabbard. I actually really like Tulsi. I don’t agree with her on much but she seems like she really cares about the country and isn’t fake like most of the other candidates are. I do really have to give her credit. Instead of pandering like every other candidate in her opening remarks, she spent most of her time calling for the end of nation building and ending the wars in Iraq and Afghanistan.

Next up we had Kamala Harris who accused Pence of spending “full time vilifying and spewing hate and misinformation”. I’m curious what country she is living in because I have never heard Pence say anything hateful about anyone. It’s one thing to disagree with Pence’s position on some issues, or maybe something he says, but can she actually name a single hateful thing that Pence has said about anyone, let alone full time? People like Kamala are so desperate for attention that they need to try to make an issue out of nothing, instead of actually talking about her positions and what she would do for the country.

Then we had Pete Buttigieg. I admire Pete a little because he doesn’t seem as fake as most of the other Democrats running. What I don’t understand is his obsession with Mike Pence and Christians. I agree that the church hasn’t done a great job reaching out to LGBTs over the years. That doesn’t mean they necessarily need to change their beliefs but there’s a way that you can stick to your convictions while at the same time loving LGBTs. Pete seems obsessed with tearing Christians down, not in a constructive way but in a negative way. He feels the need to constantly try to pick fights with Mike Pence, when as far as I know, Pence has never said a negative thing about him.

Next up was Amy Klobuchar. I’m not sure why she feels the need to force businesses to violate their beliefs and serve LGBTs, especially for weddings. I have talked about this extensively in a previous article, as someone who is both Christian and gay. I would love to know how someone refusing to bake a cake for a gay wedding or a photographer refusing to take pictures of a gay wedding is violating the gay couples rights. Why is it that so many on the left feel the need to force someone to violate their beliefs, whether I agree with them or not. If I truly believed that someone hated me, I wouldn’t want to give them my money. If I truly believed that the Christian baker hated me, I would want to take my business elsewhere. Like always, with leftists there couldn’t possibly be any other solution then bigger government and to cause division over something as simple as a cake.

I’m also annoyed that people like Amy Klobuchar feel the need to push false narratives constantly. She mentioned the Pulse nightclub shooter and that he intentionally targeted the nightclub because they were LGBT, which has proven to be false. The shooter originally planned to target Disney, but changed his plans because there would have been too much security there. During the trial, it was discovered that his motive wasn’t anti-LGBT, but revenge for the United States bombing ISIS in the Middle East. The left is so desperate to twist every single thing to fit their agenda, that the second something happens, they have already decided what the story will be and completely ignore anything that doesn’t fit that agenda and its shameful.

And of course she had to jump to “gun control” as the solution, because apparently you can’t hurt LGBTs with any other weapon. I am curious if she thinks people like me should get a chance to defend myself, if I were to be attacked. I mean if what she says is true, and Christians are this hateful group of people that are all out to get me, shouldn’t I get to defend myself? If hate crimes are on the rise among those in the LGBT community like we are constantly told by the left, shouldn’t I, a gay man, be able to defend myself against people that want to do me harm?

Next up we had Elizabeth Warren. I find it comical how Elizabeth is accusing Trump of turning Americans against other Americans (straights against gays, Christians against Muslims, etc), and yet it’s people like Elizabeth Warren who are constantly bashing Christians, constantly bashing the rich, and constantly falsely accusing Republicans of hating immigrants. It is also comical when liberals who don’t believe a word of what the Bible says, except when they could twist it to fit their agenda, try to quote the bible. I’m not sure what taxpayers paying for people in prison to have sex changes has to do with Matthew 25.

Finally we had Julian Castro. Apparently Castro believes that he should use identity politics to choose who is going to be in his cabinet. In a Castro administration, picking the best people for the job wouldn’t be enough. We need to pick people for the sake of picking people just so we could check off the box. Or here’s a crazy idea. What not instead of pandering, we pick the best person for the job, regardless of race, gender or sexuality?

While I agree with some points that were brought up during the LGBT forum,  sadly a majority of it was just another excuse to bash Republicans. There are things that need to change and we could have that discussion. But that starts with honesty. That starts with both LGBTs and Christians being willing to come to the table and have a civil discussion. Everyone that disagrees with you does not hate you. And the radical leftists in the LGBT community are not helping by going ballistic over every little thing and making up ridiculous claims.